There came unto him a woman having an alabaster box of very precious ointment, and poured it on his head, as he sat at meat.

THE FAMILY- BEING SISTERS

The precious ointment in my Alabaster Box being poured out today is of the love between sisters. I have a great bond with my 2 sisters and it is wonderful to see the same between my nieces, Cathy and Debbie.
Several months ago, younger sister, Debbie, found a lump in her breast. It was sore. It kept getting bigger. It didn't go away. She didn't have a regular doctor or insurance because her husband's job had evaporated and he had only been working part time. Debbie's is the main family income from her house cleaning. She has twin daughters. She can't afford to miss work. She didn't know what to do. The lump got bigger, more sore, she put off going to be checked out until they could afford insurance in a few months when work picked up.  ﻿
It's a good thing her mother was told what was going on at this time. She was talking with a friend at church and found out about The Breast & Cervical Cancer Program which would make it possible for Debbie to have a mammogram even without insurance.
To capsulize the whole thing, the lump was found to be cancerous. There was much discussion, more testing to see if the shadows in the other breast and in the lung were malignant also, to see if Debbie carried the genetics for predisposition to cancer, much thought, much prayer in what direction should be taken. After several weeks, it was decided a double mastectomy would be the best course of treatment.
There were many trips to the hospital and doctors. You, who have been through this, know what this is like. It is a full time job getting back and forth for medical appointments.
Debbie tried to work as much as possible between all this but her income dropped drastically. Husband, Chris, worked as much as possible. There were the girls to take care of and bills don't take a day off even if you have to.
So big sis,Cathy, stepped up to the plate once again.  Cathy was taking the whole thing very hard and could barely stand seeing her baby sister in such  precarious health. She had been with Debbie through the pregnancy and the long night of labor and delivery of Baby Ross who only lived a short while. She was there as Debbie carried the twins, Summer and Sierra, through their delivery then the long hospital stay as they grew out of the isolettes and got to come home.  She was there to help with their care-she was just always there.
Even before Debbie's surgeries, Cathy and friends sponsored fundraisers to help with all the extra travel expense and loss of income.
The night of the first surgery, it was Cathy who stayed all night to watch over Debbie and make sure she was being well taken care of.  Cathy still looks in and  helps with her care.
My sister, Shirley, would give anything to be there but has a critically ill husband who needs 24/7 care-the effects of multiple strokes. She wouldn't leave, however, till Debbie's surgery was over and the doctor assured her that it went well but then had to get home to relieve her husband's caregiver.
There will be more surgery and chemo, loss of hair, more expense, more loss of income but Cathy is still hanging in there. She is planning a large fundraiser to fill the income void and there will be others-this is going to be a long journey. In her follow-up checkup, Debbie was told there had been several other tumors that had been removed but her lymph nodes were clear. Realizing how disastrous it would have been had she waited any longer to be treated was a traumatic day.

Debbie is encouraging everyone to have a mammogram-there are agencies out there that will take care of you. Please don't procrastinate!!
My sister, Shirley, had a friend paint The Guardian Angel  depicting her children Cathy, Keith and Debbie. Even as a young child, Cathy was looking out for the younger ones. 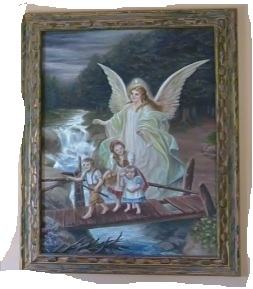 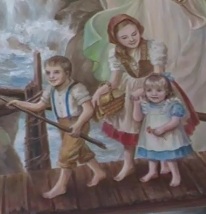 She riseth also while it is yet night, and giveth meat to her household, and a portion to her maidens.
She stretcheth out her hand to the poor; yea, she reacheth forth her hands to the needy.
PROVERBS 31:15 & 20
Would that everyone had such a sister and friend as Cathy. These are hard times but having such a great family and our faith in God is getting all of us through. Our family has been through several heart breaking disasters in the last several years. We have gathered in prayer for each other in those times as families need to do. We are believing God will heal Debbie as he has healed our others.

Posted by Carolyn Wainscott at 6:47 AM